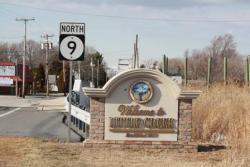 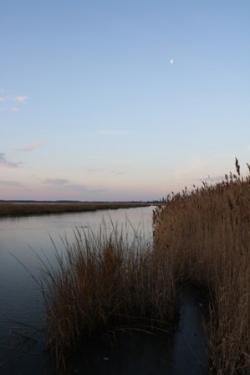 This description of life in the town of Little Creek is the first in a series of stories, highlighting in the fascinating, but often overlooked towns along Route 9 and the coast of the Delaware Bay. They reflect some of the historical, cultural and natural treasures of our state for which we should be proud. - Harvey Zendt

"A place where everybody knows everybody and is willing to help everybody" - That is how Anna Grow, owner of the Little Creek Deli, describes her home town of Little Creek, located just east of Dover on Route 9. Nestled amongst the surrounding marshes, fields and tributaries of the Delaware Bay, the town has always been closely connected with all the water and diverse land in its vicinity.

Settled in the early 1800's, Little Creek has had a fascinating history. Allegedly pirates were some of the first inhabitants of this area. A tribute to the spirit of its citizenry was exemplified by an encounter with British Seamen during the War of 1812. The soldiers sailed up the river and asked all the local farmers to supply them with food and other goods. Not one farmer supported the British request, and after the soldiers began to abscond with whatever they could gather, the locals grabbed their muskets and sent the soldiers back to the bay with little to show for their efforts.

Originally called Little Landing, the town hit its most prosperous time during the late 1800's when a booming oyster industry took the community from a sleepy village to a thriving center focused on this delectable shellfish. With the economic boom, nearby Port Mahon grew into a stopover for large ships. A fishing industry which included charter as well as commercial boats began to thrive, and with it, came a need for all the economic support such as bait shops, a cannery and restaurants. Jim Marvel, one of the patriarchs of the town, talks of a time when there were ninety shuckers going five days a week during a good portion of the year.

Unfortunately a combination of some illness from a bad batch of oysters, coupled with the diminishing supply of the shellfish, caused the town to lose some of its economic and recreational stature. Today there are virtually no boats in Little Creek, and the only ships which unload at Port Mahon are the tankers bringing jet fuel to Dover Air Force Base.

As with all communities, Little Creek has gone through its highs and lows as a place to live and work. Consensus around the Little Creek Deli, which along with the fire house is the social epicenter, is that the town is in a good place in 2009. The citizens take pride in their homes and friendships with their neighbors. In terms of business there is the deli, Mike Little's decoy and plant shop, Lane’s bait shop and produce stand , and the beautiful Little Creek Bed and Breakfast just out of town. As with all towns, there is divided sentiment on whether there should be more commercial opportunities nearby. Some talk proudly about the fact that there is not one gas station on the southern portion of Route 9, while others speak of the inconvenience.

Highlights of a walk through town include the Old Stone Tavern, which never was actually a tavern, but was built out of stone from the ballast of old sailing ships. As one looks down the creek from the bridge into town, the narrow tidal gut is a far cry from the aquatic thoroughfare, which was home to many boats and can be viewed historically on the walls of the deli across the street.

The Little Creek Wildlife Area, just south of town, protects 4500 acres of marshland and is used for hunting, fishing and crabbing. There are fifteen waterfowl blinds, three photographic blinds, an observation tower, a boardwalk and two boat ramps. One can also observe the impoundments which were built for mosquito control and other environmental purposes.

One of the most distinctive features of the area is the road out of town to Port Mahon. Formerly lined with fishing shacks and oyster shucking houses, the three mile drive to the Port now features lush marshlands with many birds on one side and the bay precariously close on the other. Indeed the area is a fascinating example of shoreline erosion, which allows the water to come very close to the road and makes it impassible during heavy rains. You can see the remains of a lighthouse built in 1903, which burned down in 1984. One may also observe tankers near the end of the pier, as it is the loading site for all the jet fuel for the Dover Air Force base. At the end of the road is a popular dock and public boat ramp.

One could drive through Little Creek and easily miss the character, history and natural beauty of the town and its surroundings. I encourage you to take an hour out of your busy lives and experience this fascinating part of our state.

Thank you to the citizens of the town for sharing their stories and for the book, Meandering Around Delaware Bay, by James Hanna, which details some great tales of the area, and Life On The Edges for the photographs.