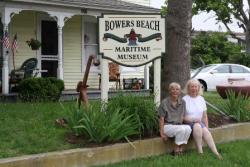 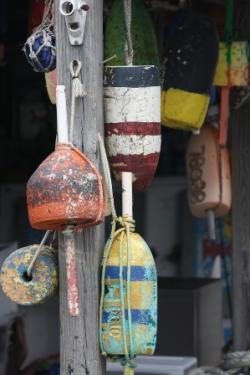 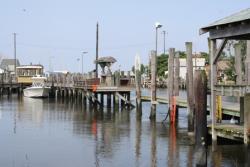 Spotlight on the Bay - Bowers Beach

This description of life in Bowers Beach is the second in a series of stories, highlighting in the fascinating, but often overlooked towns along Route 9 and the coast of the Delaware Bay. They reflect some of the historical, cultural and natural treasures of our state for which we should be proud. - Harvey Zendt

As the St. Jones River winds its way to the Delaware Bay, at its mouth one finds one of the quaintest communities in the state – Bowers Beach. Once one of the premiers fishing towns on the Delaware Bay with an average of three hundred boats at the docks or moorings, this town has endeared itself to many residents of the state. People come to fish, to paint, to drink and eat, and to stroll the beaches looking for treasures.

Bowers Beach has gone through a variety of interesting stages in its lengthy history. The town was founded and owned by the Bowers family from the 1700's through the 1850's. From the mid 1800's through the 1950's, this scenic beach town had a thriving tourist industry with hotels, restaurants and a variety of recreational opportunities linked to the water. Today the number of commercial establishments has diminished, but residents don’t seem to feel that this is a bad thing necessarily and there is a renewed energy to revive some of the positive traits of the town. There are new homes being built, and a number of the old ones are being revitalized in a variety of creative ways. The most distinctive home is owned by a local fisherman. The purple home feature a chimney covered with conch shells, a scallop shell trim and a yard filled with treasures from the Bay. The citizens want to balance the inevitable growth of the town with the maintaining of its wonderful charm.

In order to truly understand the town, one has to look at it through the lens of a fisherman. William “Frenchie” Poulin is a perfect person for such a conversation. In addition to having been mayor of the town for a number of years, he has fished the nearby waters since 1970 and continues to love the life on the water despite the diminishing market. In the 1980’s there were six head boats and eight commercial boats that left the docks each morning; today there are three. The loss of the once abundant trout population is the main reason for the decline in boats, but there has been a recent resurgence in the croaker and rockfish population, due in part to government controls of the amount of fish which can be taken from the Bay. This regulation is controversial, and depending with whom you talk, it is necessary for the survival of some species and the health of the Bay or it is an unnecessary interference into the life of the watermen and actually has hurt the populations of some species.

Each spring the beach is one of the sites for a unique event on the Delaware Bay, the horseshoe crab survey. For ten years Bowers Beach has been one of ten spots along the Bay, where volunteers spend a few hours on twelve nights throughout the months of May and June, counting the number of horseshoe crabs on the beach. The Delaware Bay has the highest concentration of horseshoe crabs in the world and the spring spawning is the best time to assess their population. Last year seventy volunteers counted over 1.5 million crabs on beaches in New Jersey and Delaware. It is a wonderful opportunity to witness one of the true marvels of nature and help scientists track this historical, fascinating creature.

For a small town Bowers Beach has a number of distinctive events. Judy Martin, Mary Anne Vavala and Claire Turrisi are three of the overseers of the quaint maritime museum in town, and help organize a number of these fun gatherings. The most famous one is Big Thursday, which takes place in early August and began as a celebration of the beginning of the oyster season in the 1800's. This year on August 9th there will be a parade, great food, games crafts and other activities. During the course of the year there is an also a blessing of the fleet, the entertaining canoe joust and the decoration of the holiday tree on a number of special days.

As you wander through town, you can't miss Donovan’s dock, as its entrance is guarded by two thirty foot orange palm trees and a fishing boat with a great white shark lunging through its bottom to grasp the bait of an alarmed fisherman. The owner, Shirley Donovan, feels fortunate to live in such an interesting town and wants to share it with visitors whether they go fishing on her Head Boat or not. The serieof docks provide a great vantage point to view the fishing boats and see the small town of South Bowers Beach on the southern side of the Murder Kill River. The docks personify the spirit of the town. In addition to Donovan’s there is one with a restaurant which has a beautiful old wooden boat as its outdoor bar.

Just minutes from Dover, Bowers Beach has a feel of a town connected with the Delaware Bay. Whether you come for a seafood meal, a visit to the museum, open on weekend afternoons during the summer, a fishing trip on a head boat or a stroll on the beach, you will feel like you are in another world.

Thank you to the citizens of the town for sharing their stories and Life On The Edges for the photographs.