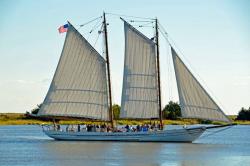 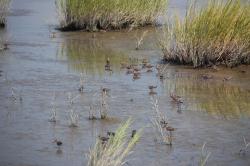 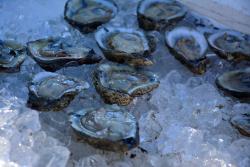 Spotlight on the Bay - Bivalve, NJ

There can be no better place to explore the world of bivalves than in Bivalve, New Jersey, and there is no better time than now, as the Bayshore Center at Bivalve (BCB) puts the final touches on the restoration of its Oyster Shipping Sheds and Wharves. Twenty five years of planning and five million dollars invested ensure that this is the place to go to experience the intersection between oyster and man.

The Bayshore Center at Bivalve (BBC) sits at the heart of the oyster industry, both past and present. This is where, in the first half of the 20th Century, oyster schooners were rafted up to seven deep at the wharves after a busy week of harvesting. Oystermen trundled thousands of baskets of oysters a day from ships to floats to scows to wharves to the boxcars waiting on the tracks just outside the sheds. As many as 127 boxcars a day hauled oysters from Bivalve to New York and from there to the rest of the country and beyond. Carts on the streets of New York and Philadelphia peddled oysters to passersby just as they do hot dogs today.

BCB owns seven of the 30 sheds which were originally built by the Central Railroad of New Jersey in 1904 to assist the oystermen in getting their harvest to market. Today they are home to the 1928 Oyster Schooner, A. J. Meerwald, which was discovered in deplorable condition in 1988 and historically restored by BCB’s Executive Director Meghan E. Wren. “I saw an opportunity to make connections between the rich history and incredible natural resources of the region- both of which have long been underappreciated. Often a place’s assets are taken for granted until something makes you take a second look. We’re trying to provide a lens for that second look.”

Standing on the newly repaired wharves today, you will see the oyster, fishing and crabbing boats heading out for the catch just as they have for over two centuries. You will also see the A.J Meerwald taking on school children as they rush out of their school buses, breathing in the wonderful salty air, sometimes wrinkling their noses at the smell from the clam factory down the road, but all bright eyed and eager to go aboard, raise the sails, and explore the Delaware Bay. They will help deploy an otter trawl and examine the living contents, learn about the life cycle of oysters and salt marshes, and understand how actions they take can either harm or help the oyster’s habitat and the Delaware Bay as a whole.

After a sail, there is much more to do in Bivalve. Walk along the recently reclaimed wetlands area, where you can go for miles and watch thousands of shore birds shriek and swoop as they come in from the bay to feed, rest and breed along with the resident muskrats, turtles, and crabs.

Back at the sheds, The Delaware Bay Museum and Folklife Center inaugural exhibit, “The Abundant Oyster” explores the place of the oyster industry in America's early industrialization and the role of African Americans in shaping the culture and economy of South Jersey's Bayshore. Also located in the restored sheds are a Museum Shop, Gallery and the Oyster Cracker Café, serving the best of local specialties, including Delaware Bay Seafood. The sheds feature special programming the second Friday of each month throughout the year, showcasing the best of Bayshore culture from food to art, music, craft and history. At these events, participants can celebrate all aspects of the South Jersey waterfront with fresh oysters, New Jersey wines and beer, locally sourced food, and art in all media celebrating the best of our natural areas. Each month, a different aspect of the Bayshore area, ranging from its history in the War of 1812, to pirate activity in the area, to the interconnectivity of red knots and horseshoe crabs, opens the eyes of our visitors to the amazing complexity and richness of the area.

Bivalve is located on the Wild and Scenic Maurice River, just in from the Delaware Bay near the town of Port Norris, which is about an hour south of Philadelphia or Wilmington. A.J. Meerwald sails seasonally to ports on the Delaware River as well as those along the New Jersey coast and beyond. Thematic public sails, popular with all ages, are available, as are private and corporate charters.

Thank you to Laura Johnson for the great article and photographs.